You will be pleased to know that the journey from Venice to Vienna was a huge success. Although Venice was beautiful, we were all pleased to leave Italy; the sweltering heat, the dodgy metro and the additional charges that seemed to be on everything we bought.

The total duration of the journey was just over 10 hours, including a window of 20 minutes to change. It sounds like being stuck on a train for that long would be a nightmare journey, but it was day four of our trip, and we had had an intense past few days, so it was nice to be able to sit down and chill and write our diaries. On the first train we were in a cabin (is that what you call it?) like we were in Harry Potter (we’re all avid HP fans to Kieran’s dismay). There was a spare seat so we were all (except K) waiting for Professor Lupin to rock up. He didn’t. The second train was a little more posh. On this train I felt a bit skanky. In Italy it was too hot for makeup and fashionable clothes. However, in Austria the weather was overcast with a little rain. Here’s some advice for other travellers: pack a wash bag with a tooth brush, toothpaste, baby wipes and spare pair of underwear. Perhaps a pair of leggings. Pack it so it is easily accessible whilst on a train. It felt amazing to freshen up!

We had access to wifi on the second train, which cut out whilst we popped over the boarder to Germany to take a more direct route to Vienna. However, by the time we made it to Wien West Bahnhoff, cabin fever had set in. We greeted Austria at 23:24 with the choruses of all the Sound of Music Songs we could think of (we only really knew the choruses), accompanied by a little jig to ‘So long, farewell’, which was tricky with all our gear on, but I feel we pulled it off.

Using the U-Bahn to get to the hostel was easy, and we made it to our hostel just after midnight. We were staying in Hostel Hütteldorf. It is more like a hotel than a hostel, with communal toilets and showers, unless you booked into a private twin room where there is an en suite available. It was nice, but again not so communal. And the kitchen area consists of a microwave and no cooking utensils so make sure you bring your own bowl.

We are becoming accustomed to living out of our backpacks and planning ahead. We dumped our bags and immediately began leaning over the map of the city to decide what we wanted to do the following day, not because we felt we had to but because we were buzzing to see what the city had to offer.

We decided we would take our time in Vienna because we didn’t want to keep rushing things or our trip would be over before we knew it. Breakfast was included in the price and serves until 10. We made our way down around 9ish to consume tinned fruit (bleurgh), bread and ham and cheese (this seems to be our staple diet at the moment) and instant coffee (bleurgh). But it was included so we ate it and enjoyed it.

Kieran, having had enough of our girl talk, set out on his own path, so we headed over to the Schönbruun on the U-Bahn. The palace is beautiful and walking through the grounds is free. Again, I would recommend taking an architect with you. For lunch we walked to the Nasch Market, a permanent food market. We each bought a small portion of something and shared it amongst each other. We sampled falafel and mango hummus, followed by carrot curry, sushi and tiramisu covered almonds. They were beautiful. The people here are much friendlier than in Italy and the just love the English. One waiter, around the age of 40, decided that he would set his brother up with Chloë and that if Rebec thought that the tender age of 22 (her age) was old, then what must she think of him?

On the map we found an attraction called ‘Dog Shit Boulevard’, so naturally we set out to find it. Unfortunately it was very disappointing, consisting of an ordinary street and three dog poos. We’re still not entirely sure why it was called that on the map but hey ho, we continued our walk through the city. We also saw the art and natural history museums, and the Hofburg, all within walking distance. We also did the ‘Phoebe (from Friends) run‘, which consists of running and flailing your arms above your head, down the sloping approach of a rather fabulous building. It turns out that was where the Austrian parliament sits. Oops. We had a toilet stop in Museums Quartier where we were required to hand over €0,50 and were shown to our cubical by a very friendly woman. We also finished our day by getting caught up in a protest about refugee rights whilst sitting on deck chairs outside what we thought was St Stephen’s Cathedral. There were some beautiful Austrian policemen escorting the protest, and we would have stayed to admire them, only in her excitement, Rebec threw her right arm straight in the air. For fear of being accused of Nazi-ism we scarpered.

Making our way back to the hostel, we had planned to stop off at the supermarket to grab some dinner, only it was shut. We were reduced to attempting to make our dried packet pasta that we purchased in Venice, in the microwave. Rebec and myself purchased a tomato pasta. Only it wasn’t. It had dried prawn and squid in it. Squid. You should not be able to do that to seafood. Needless to say we forfeit our dinner.

On day six Kieran took to the mountains and we took to the city again. We left the hostel about 12ish and hopped on the U-Bahn. We didn’t bother to buy the €2,10 ticket because there are no barriers and no one checks them. STUPID MISTAKE. Plain clothed officers boarded the train. We had tickets from yesterday which we hadn’t validated but still it was so stupid. We were escorted off at the next platform and were told we had to be fined €100 PER PERSON. We managed to play the innocent foreigner card but were still charged €50 each. It was the most idiotic move we could have done. Completely our fault, but that was the equivalent to three nights in a hostel each. We had to pay it and, rather than dwell on it, be thankful it wasn’t €100 each. I wouldn’t recommend not paying to anyone.

We made it to Karlsplatz where we ate our lunch. We also finally found St Stephen’s Cathedral which isn’t that amazing from the outside but stunning on the inside. We also went on the search for Mozart’s house. After walking round in circles for around 15 minutes, we realised we had already walked passed it many times without realising it. Feeling elated that we found it, we swiftly left when there was nothing to do there that was free. After all, we had been fined €50 earlier that day. We headed back to the hostel where Kieran’s brother and his girlfriend, Ryan and Sían, who are also backpacking had arrived. It was nice to see them and compare our trips so far.

Around 8 o’clock we made our way to the Rat Haus (town hall) where the Vienna Film Festival was being held. We treated ourselves to a meal there (Rebec and Em ate kangaroo. They said it was fabulous) and sat down to watch an opera written my Mozart with a bottle of wine. The scenery was beautiful and the opera wasn’t that bad. We were all alive with the experience.

I write whilst on a direct train to Ljubljana, Slovenia. No I didn’t sit on my keyboard, it’s a real place! 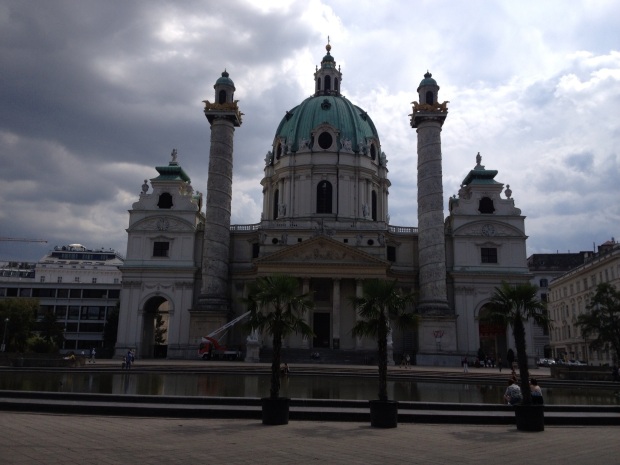 We ate lunch outside the Karlsplatz

Vienna Film Festival outside the Rathaus