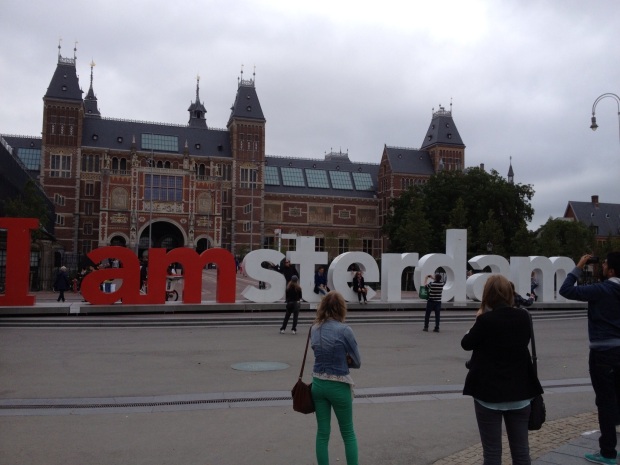 It wasn’t actually our 21st stop, it was our 11th city on the trip. No, it was a time of celebration to welcome in my 21st year. Now, I’m going to try and not make this blog post all about me but I did have the best birthday EVER.

We arrived in Amsterdam at around 15:30. We split from Kieran as he was meeting a few friends from home who had flown out to meet him for the weekend. We were staying at the Hans Brinker Budget Hotel (names can be deceiving, it’s still a hostel) on Kerkstraat. The instructions said told us to take a tram. By now we considered ourselves to be experts at map reading and able to distinguish between a long walk with our heavy backpacks or a short walk. We made it to Kerkstraat within 10 minutes. We felt proud of ourselves. Now all we had to do was follow the numbers until we reach 136-138. We were at number 670. Oh my was it a long walk. An hour later we made it.

We had booked the hostel back in England because we had been told that last minute in Amsterdam is unlikely and expensive. The Hans Brinker doesn’t have a kitchen but it does serve breakfast in the morning (included in the price of the room) and meals at dinner time. Granted, they’re not Michelin standard but at around €6 a meal it’s pretty good grub. The rooms are small with a small en suite shower and toilet. This makes it stuffy and horrible to move around in. However, it’s clean and perfect for a few nights stay. There is even a club in the Hans Brinker basement.

Our bodies knew that Amsterdam was our last stop and all we could think about was sleep. So we did. That is when our two roomies arrived. They were a very sweet Argentinian couple but meeting them properly would have to wait a few hours. We were out for the count.

Prepping for the evening’s activities (we were going out to welcome in my birthday) I hopped in to the shower. Upon exiting said bathroom I was greeted with a cake and a face full of balloons, accompanied by Uncle Bryn style shouting “SURPRISE! SURPRISE! SURPRISE!” (For those of you who are not avid Gavin & Stacey fans, click here to see what I mean.)

Now, I’m going to try and explain the evening’s events and still maintain that it was my best birthday ever, but you’re not going to believe me. I think it was a night where you had to be there in order to understand the hilarity of it.

We met up with the boyf and his four friends who had flown to Amsterdam for a lad’s holiday and overlapped for my birthday. They had been here for two nights already so we followed them. They were taking us to ‘the best club in Amsterdam’, Club Air. It had better be the best club at €16 per person for entry! It wasn’t. It was pure House music (that’s the kind of music that pumps your ears, has no lyrics and you have to dance by sort of punching the air). I guess for some people it’s great, but we were seeking Katy Perry, Tom Odell and Carley-Rae Jepson. After about 20 minutes we left. We weren’t upset/gutted/angry at all. Our night was to continue. We then walked the age back to the Hans Brinker to resume drinking in the club there. After a while we decided to go for another walk to seek another club and so on. It doesn’t sound epic, if anything it sounds like it an absolute ball ache (excuse my Dutch), but we had a laugh.

I would like to say that the following day, 1st September, we explored Amsterdam, but we didn’t. We climbed into bed around 5am and didn’t stir until 12. What we did do however, was hit up one of Amsterdam’s most famous attributes: it’s Coffee Shops. Needless to say that that night we slept well.

The 2nd September was our final day of the entire trip. As we had to check out of the Hans Brinker by 10am and we weren’t due to leave until 21:30, today was our day for sightseeing.

Amsterdam is stunning. By now I would have though we would have seen it all but no, Amsterdam is something else. The canals cannot be compared to Venice of course, but they are still beautiful. The houses are tall and thin and some of them even appear to be falling forward. I thought those buildings were dangerous to walk past, let alone live in. However, Architect Emily informed us that “it is possible to rebuild a building but keep the original facade.” So that’s what we presumed was the case.

I found visiting Anne Frank’s house very moving. Although it is not furnished (in respect of Otto Frank’s wishes) it is still has the same impact as if they had been mocked up. At €9 per adult visiting, I found it fascinating walking around the rooms in which I had read about in the diaries. The original book shelf hiding the doorway to the annex remains. Videos of interviews documenting the lives of the inhabitants by surviving friends are scattered throughout. There isn’t too much reading required so you are free to absorb the information at your own pace.

We did take a trip into the Red Light District. It’s insane! Men, women and men dressed as women are just flaunting their junk in a window the size of a shop. If the curtains are pulled it means the prostitute is occupied. It is such a foreign concept to us. We did leave shortly after we were hollered at. “Do you girls work here? No of course not, you’re too sexy.” Er, no thank you.

What better way to finish our Amsterdam trip than with a visit to the infamous ‘I Amsterdam sign’. We thought we were hilarious having our photographs taken whilst we were sitting on the ‘T-E-R-D’ section. We thought that was the most hilarious thing until Rebec tried to get down from the top of the ‘E’. Rather than describe it, I have included the video below.

I would like to say that come 21:30 we would be boarding a flight to Gatwick and that we would be home before midnight. Alas, no. You must remember we are still students and we took the second option. We took the 11 hour Megabus that would drive through Brussels in Belgium, to Calais, take us on to a ferry for an hour and a half, arrive at Dover only to drive past our junction on the M25 for another hour to take us safety in to London Victoria for 7am. But for £1 it was worth it. By now we had learnt to sleep on public transport and we were such a close-knit group who shared so many hilarious memories, we didn’t care.

I thought Amsterdam was our last city stop, but I awoke as we were crossing Lambeth Bridge, where the rising sun set the Houses of Parliament alight. No, this was our last city. London: a stone’s throw away from home.


Rebec trying to get down from the ‘e’