…Normal to be honest.

This is a genuine product I promise you. Royal Baby Gaga is a vanilla flavoured ice cream made with breast-milk.

It is the brain child of breastfeeding campaigner Victoria Hiley released to hit the shelves to coincide with the Royal Birth. Read more about it on the MailOnline.

Breast-milk though. Why? It is the most off putting ingredient and name of a FOOD product I can think of. It’s just that it’s ice cream made from someone else’s boob. An actual human nunga-nunga. That’s weird. Like really, really weird. I know that it’s a natural sustenance packed with nutrients – and for many of us it’s the first thing we tasted in this world – but that’s is not enough for me to put a spoonful of someone else’s boob juice in my mouth.

So anyway, it was my task to take it to the streets of London and ask normal people to try this abnormal ice cream (Before you ask yes I did tell people what it was made of before I asked them to try it and I also had to clarify that it wasn’t made from my booby essence).

It was then, when I was walking around with an open tub of ice cream, that a bit of the stuff was on my finger and I subconsciously LICKED IT OFF.

And it tasted vanillary and ice creamy and generally like a high quality dessert supplement. I no longer feared the tub.

I can see the point that creator Victoria is making – my society influenced expectation told me breast milk is a nasty thing when actually it’s nothing to be feared. I understand. But available in the shop for £19.99 a tub I think I will stick to Ben & Jerry’s thank you very much.

Watch what happened when I asked people on the street to try it. 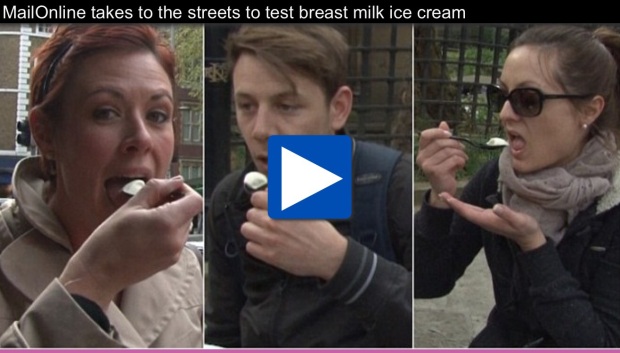 Click the picture above to take you to the video on the MailOnline.