*Warning. This post contains information that may offend, including needles, veins and the misuse of a bed pan*

Today marks the day that I have been in hospital for a week. By 5pm tonight it will be 168 hours. More importantly, that’s 168 hours without fresh air. I’m starting to worry that when I do go outside I might feint from all of the oxygen. If you’re planning on visiting me any time soon, instead of bringing me chocolates, could you endeavour to bring me a jar of fresh air? I’ve asked Oli but he threatened to fart in it. Needless to say the trust is gone.

Today is also a day to celebrate because I brushed my own teeth. Granted, I had to hold the toothbrush still and shake my head from side to side but this is a big deal okay? My right arm is out of bounds – it has to stay flat so that I don’t kink the tube (more in that later) – and my left arm had gone bluey, greeny, purpley, swolleny, difficult to movey, can’t hold my phoney due to the bruising caused by the attempts to take my blood. Honestly, it got to the point the other day where they tried three times in my hand and once in my foot and still got nothing. 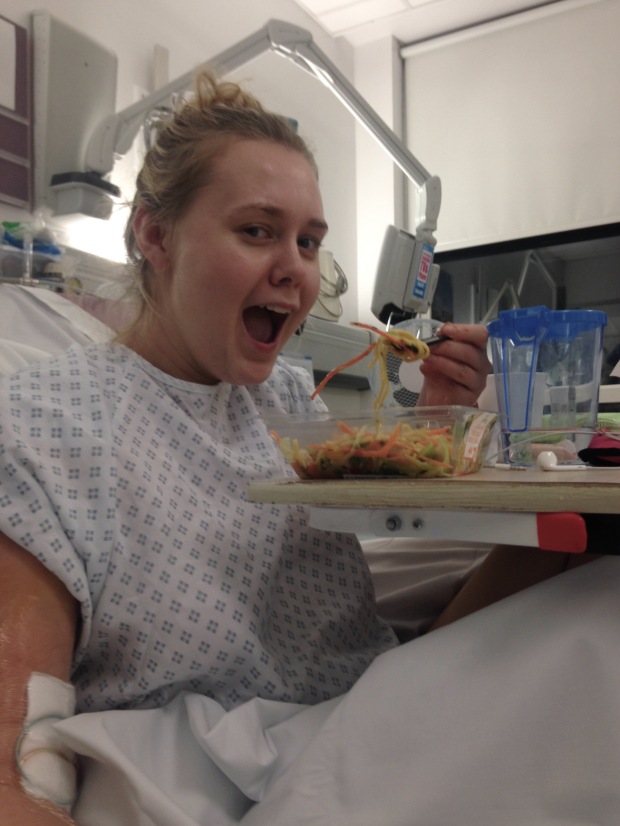 Me finally being able to eat post 14hrs of being nil-by-mouth. That is one sweaty forehead.

So on Friday I went down to theatre for a local anaesthetic (ew so I’m awake for all of it) and a procedure to put a tube in to my blocked vein in my right arm and then a wire inside that until it reached inside two thirds of the clot. They then used an infusion of drugs to target the clot directly. Because the drugs thinned out my blood, I’ve bruised everywhere and badly!

I’ve been bed bound with two even gammier arms. I’ve mainly slept – I did have a few tears but now I’m so dehydrated that it’s almost just salt in my tears and it stings my eyes and the worst bit is, I couldn’t  even wipe them because I couldn’t bend either of my arms! I’ve been kept busy by loads of  great visitors  though- I’ll write more about it later as I’m a bit tired now.

I’m not going to lie, being on HDU sucks. I’ve never been so hopeless and in pain. And a trick I’ve learned is not to hold in a wee and save it up for minimal bed pan usage – there will be over spill!

I’ve just come back from the theatre where I am now clot free! Yay! But the bad news is, it grew over night instead of shrinking so they had to removed it with a vacuum and a balloon (kid you not). It has gone now but because it grew, it would mean that I have had it for a long time and that it’s likely to come back and sooner rather than later. It looks like the plan might be for me to have an operation to have my top rib removed to create more room for my veins to avoid the kink.

I arrived back from theatre two hours late to find Oli, Max and Clo chillin’ which was lush. Even better when Dad arrived with the Subway order! What a lad. (Btw I’ve been nil by mouth for the past four days, only being allowed to eat in the evening. Terriblé)

Because I’ve not moaned enough, where my blood pressure has had to be taken almost every hour since I’ve been here, I’ve come out in a lovely red rash on my left arm. And my right arm also has a rash because of the clear dressing over where the tubes were. So I’m now on antihystemines too.

Anyway I’m knackered now. I have more to write but I’m just too tired. Thank you everyone for the lovely messages.

90-year-old Joyce has just moved in to the bed opposite me on HDU. The nurse asked ‘are you allergic to anything?’

Joyce said: ‘Not really. But if you were to offer me a bit of brandy I wouldn’t say no.’

Joyce is winner. Off her rocker but she’ll be alright…