I spent 3-5 days literally laughing until a bit of wee came out. Manhattan with the girls was AWESOME.

The Spice Girls from left to right: Me, Chloë, Mum and Marie.

For Clo’s 21st birthday, Mum promised to take her to New York for some mother-daughter time. As time went on, the group grew (because who doesn’t want to go to Nee York?!) with family friends my mum’s age. Chatting to me over the dog and bone, mum was worried that Clo would need a youthful member to join her in the clique. Much like Katniss Everdene in the Hunger Games, I volunteered to take one for the team. Poor students/young professionals that us sisters are, we began saving. Ain’t no dollar gonna stop us from travelling. So there was four of us: Mum and Marie, the two grown ups (I use the term lightly), and two young’uns. The perfect recipe for a weekend city break – no boys thank you very much.

And made it! You’ll remember it was a little hit and miss for a while, thanks to Clot II. Armed with a set of horrendous flight socks despite the fact that I get blood clots in my ARMS. What a tit.

As a foursome, we were working with very different budgets and us being the povo students decided to introduced mum and Marie to Airbnb. I think it’s safe to say we did not convert them.

While a hotel room was going to cost around £700 for the three nights we were there (and we’d probably get two), our Airbnb was around £500 for the stay. Now, my experience with Airbnb is that you get what you pay for. In Croatia and Barcelona it served us really well, with clean, gorgeous little apartments providing us with everything we needed. Iceland was a bit hit and miss. New York was crap. But also hilarious. 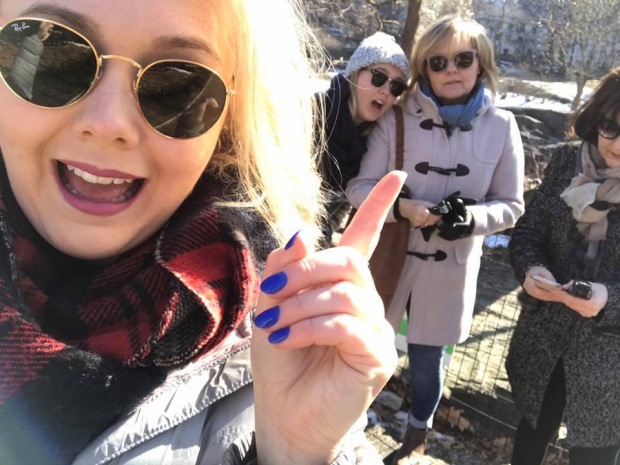 We should’ve known how things were going to pan out when we were left waiting outside for 40 minutes for the cleaner/housekeeper to bring us the key to the apartment at 10pm at night, and a young woman buzzed up to the ‘penthouse’ wearing a short, mid thigh length coat that left a little bit of flesh on show before the thigh high metallic silver stilettos began. Of course, she may have been the owner of the apartment who had just lost her keys or, of course, she could have been a lady of the night. No judgment either way of course.

When the cleaner did finally show up with no apologies, she showed us up to a weird looking apartment at the end of a fag stinking corridor that was supposed to sleep five. It’s hard to imagine but I the apartment was split across three floors. So through the door on the right was a kitchen, the left a bathroom and then a little further on was a ‘bedroom’. I say ‘bedroom’ because the entire room was a double bed. At the end of the corridor it became a sort of balcony where you could go up to the open plan double bedroom or down to a living area. And the weirdest part was, there was an internal window at the end of the box room that looked out into the living room and upstairs bedroom so in the morning Marie could wake up, all Sleeping Beauty-like, open the window and bid us good morrow whilst we were still in bed. 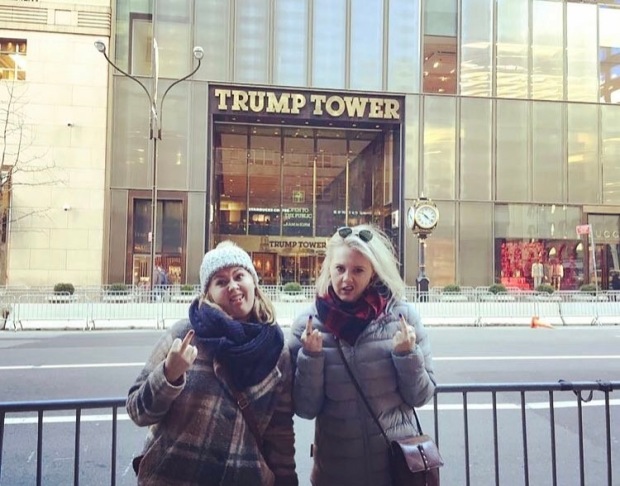 Moaning aside, the apartment provided us with a place to sleep and it wasn’t unliveable. It was situated in Midtown, and a stone’s throw from the Chrysler Building and Central Park. At the end of the day we were in New York baby!

Have your selfie stick licence With you at all times

This is my mum using her selfie stick to take a photo a the view. Need I say more?

We were well and truly jet lagged but you don’t have time for it when you’re only in the city for a short weekend. My advice? Man up and push through it. Plus, tiredness makes everything seem so much funnier and you end up giving your abs a proper workout purely from your hysteria.

We didn’t go there to shop because, thanks to globalisation, pretty much everything we would’ve bought out there we could’ve picked up in the UK. Besides, it was Clo’s first time and who’s got time to go to Zara when you’ve got an entire city to see?

To see the sights, we opted for the City Pass. For £70 it got us into three attractions and allowed us to join the speedy queues. In my opinion, paying entry on three attractions is all you need. We used ours going up the Empire State Building, the Rockerfella and visiting Lady Liberty. You can screenshot the QR code on your phone too so it’s dead easy and no flapping about with bits of paper. 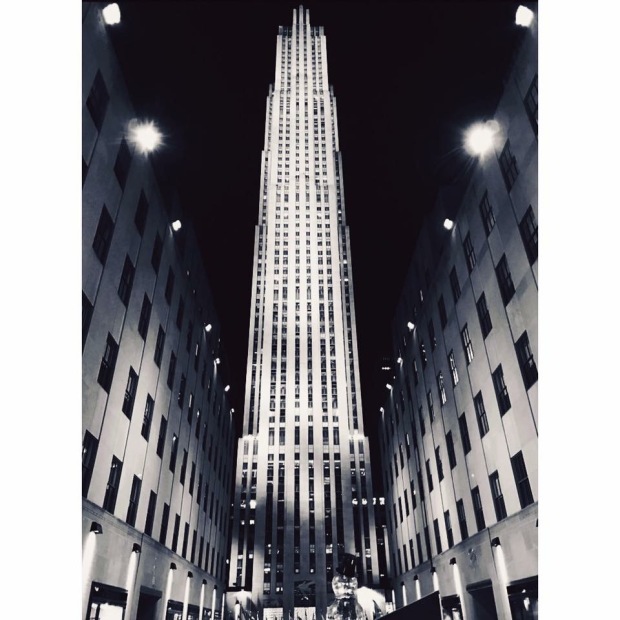 (I say no flapping about but my mother still managed to lose her pass that she had emailed to a disused email address. This meant we had to go to Grand Central Station so she could get on to the wifi to then call the company to get a new one sent. They were very helpful with cancelling the lost pass and issuing a new one. Here’s a short video of Mum and Marie trying to work out why they couldn’t hear when BOTH OF THEIR PHONES WERE PLUGGED INTO THEIR SELFIE STICKS. I can’t even.)


Make use of the freebies

There are loads of free things to do in Manhattan – it’s one of those cities where sometimes all you need to do is see the sights. There’s Wallstreet, Times Square and Broadway. Walking the Skyline, seeing China Town, Soho, Central Park, Ground Zero. And if you can’t afford to shop, that’s no problem. There’s more to New York than Fifth Avenue.

If you’ve had any experience dining out Stateside, you’ll know that the meals are often the size of a baby elephant. Not in New York though, where fash-hun is paramount and being skinny is on trend, the portion sizes are not overwhelming. You’re safe here.

Chloë was nearly defeated by her french toast brioche avec cream brunch at the Hundred Acre in Soho.

Like all women on a city break, we were obsessed with brunch – which New York does really well. I’d recommend the Lexington Brass on 48th Street, Lexington Avenue (not for New York cheesecake though), just don’t order a Bloody Mary or the lining of your stomach will disintegrate from the pure Worcester sauce. And if you find yourself in Soho, Hundred Acres is a beautiful brunch spot with sweet and savoury on the menu – perfect for the quinoa and spinach lover. It’s the city that never sleeps – except is does. Things do actually close. 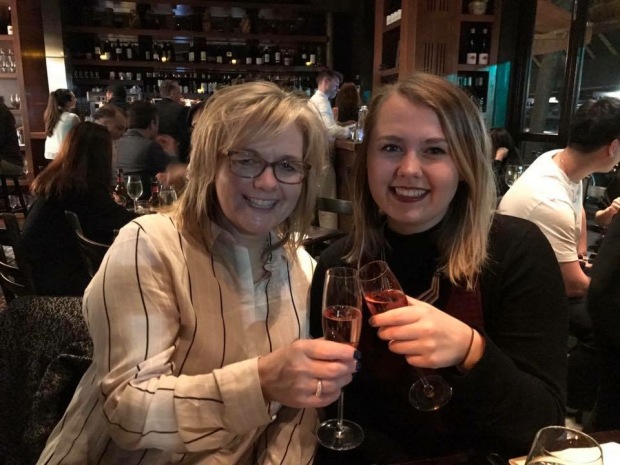 Mum and Clo in a swanky tapas place somewhere in Manhattan. 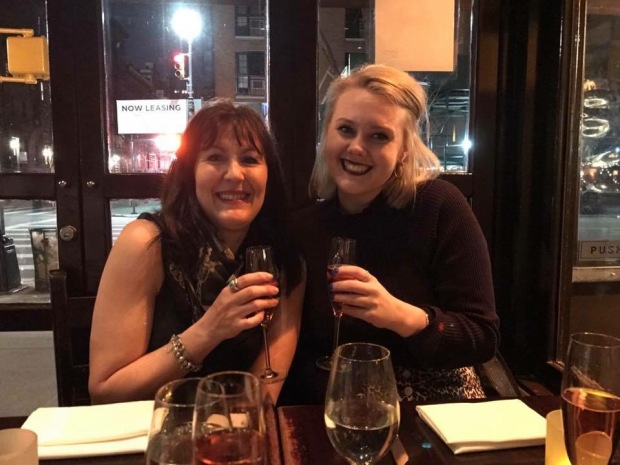 Marie and me sipping on pink fizz, resting our barking dogs (it’s a northern thing apparently…)

Showing Clo around the city was AMAZING. It’s like a film set isn’t it? The buildings are huge – puts London’s Shard to shame. I love it. I would absolutely love to live there, if it wasn’t for the crappy labour rights in the US. And Trump. It wasn’t until Clo said ‘there’s no space’ did it dawn on me that because of the block system, there is no room to breathe.

But who needs to breathe when you’re in Manhattan?