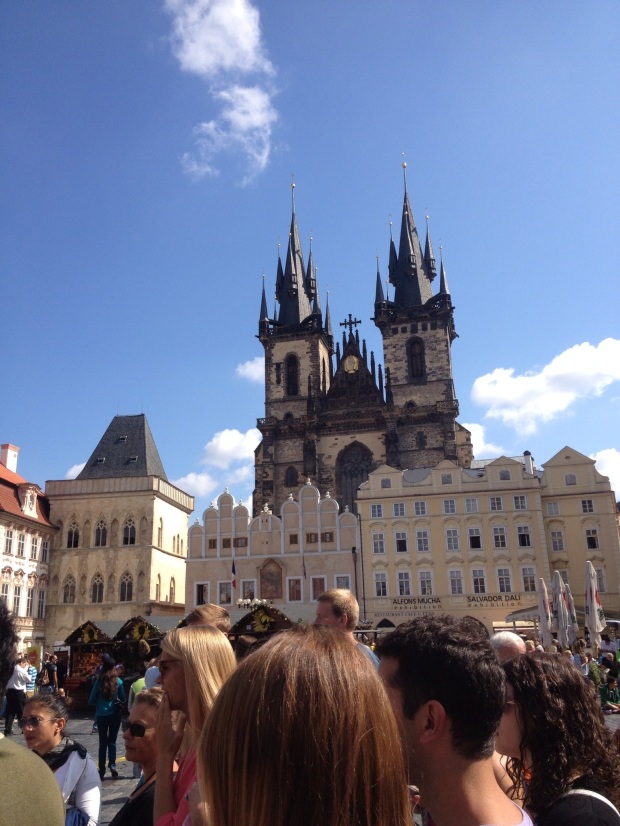 Arriving in Prague was easy enough and the walk to our hostel was straightforward. We were staying in the Chili Hostel, which if I’m honest, isn’t that great. It is massive and has a kitchen available to use, but it’s small in comparison to the number of people staying there. And because the hostel is so big, there’s a lot of free roaming and I didn’t really trust the other people staying there, which is a shame because everywhere else I’ve felt safe. We were on the fifth floor. There are no lifts here so we had to walk up ten flights of stairs. TEN FLIGHTS. Once we came down for something there was no way we were going back up until sleep time.

The first night in Prague we decided to catch up on sleep. None of us seemed to have the energy to do anything. So with home cooked bangers and mash in our bellies we called it a night. There was only one other person in our dorm and he was Spanish I think. He didn’t really speak to us and didn’t introduce himself. So naturally we dubbed him José.

The following morning we met at 11 o’clock in the Old Town Square to go on a free guided tour around the city. I would recommend this option to anyone. Because it’s free, they do ask for tips. Around 100 Czech Koruna (about £3.30) is plenty. Our guide was called Australian Ashley and, dare I say it, he was more amazing than Australian James from Rome. I had no idea about the history of the Czech Republic but Ashley made it so interesting. He told us about the success under Charles V and the decline under the King Wenceslas. He took us through the Old Town and told us about how the Astronomical Clock was voted the second most disappointing attraction. He talked us through how Mick Jagger and Keith Richards funded the lights that light up the castle. He walked us through the Jewish Quarters where the ground was raised by three metres because the land was prone to terrible flooding from the river. We loved Ashley.

In the afternoon we visited the Pinkas Synagogue. Inside, the names of the 22,000 Hungarian Jews who were killed in the Holocaust are scribed on the walls: the names, date of birth and the date of death are all grouped in families, according to where they live. The first room was daunting enough, but there are four more rooms the same. Inside, there is also an exhibition of artwork produced by the Jewish children of Hungry during the Holocaust. The story behind their survival is as follows.

The Jewish population of Hungary were forced to migrate into the Terezín ghetto outside of Prague, under the Nazi regime. The living conditions here were terrible; there were more Jews forced to live there than the area could sustain, they were given curfews and their use of public transport was restricted. Life was depressing. In order to help the children of the ghetto cope with a lifestyle their friends and families did not choose, an artist named Friedl Dicker-Brandeisová held art therapy classes. The children aged between 10 and 18 were encourage to draw memories of home, dreams and happier times. For these lessons to take place, there was a lot of smuggling of art materials into the ghetto, under the noses of the Nazi’s. Eventually, Friedl was transported to Auschwitz. However, before she left she buried suitcases full of the children’s work and told a friend of their location. After the war ended, the suitcases were recovered and the drawings displayed.

The optimism portrayed in the drawings is heart wrenching, especially as the fate of each child artist is displayed adjacent to their artwork. Only a few survived the Holocaust. The colours of the drawings are surprisingly bright and clear; a constant reminder that this slab of history was only around seventy years ago. The exhibition has provided the opportunity for permanent recognition of the names of Jewish children who would have otherwise been forgotten.

Well, it certainly lived up to it’s reputation. After another home cooked meal, we ‘got ready’ for a night out. I put that in apostrophes because I assure you I would never go out at home in what I wore. All four of us girls put on some denim shorts and donned our Prague pub crawl t-shirts. For €20 we were greeted by reps who showed us where the bars were. We had an hour of free wine, beer, vodka and absinth shots in the first bar. Needless to say it tasted vile, but hey it was free and we are students so we take what we can get.

We attended three bars and a club. I would simply love to tell you the names of the places we went to but you have to let your hair down once in a while don’t you? These bar crawls are often slated by seasoned travellers, but I think it’s a great way to meet people. We spent the night with travellers from Brazil, France, Canada and Australia. We even met a bloke from our neighbouring village back in England! What are the chances? All continents united under reciting the theme tunes to The Sleepover Club and Coronation Street.

The club at the end was a five storey beast, playing the best of all genres of music, including an aptly named cheese floor. The night ended with a drunken detour to the famous Charles Bridge, where we were much less appreciative of the gothic statues which lined either side, or the fantastic view of the Castle Grounds (lit up thanks to the Rolling Stones) than we should have been.

We decided that a twenty-past one in the afternoon train to Kraków, Poland, would suit our hangover timetable just fine. Emily, Chloë and Kieran went to the shop to get food and would meet Rebec and myself at the train station. Rebec and myself left 40 minutes for a walk that should have taken us only 20 minutes. Well, we get lost. And stressed. The others were waiting for us the station and I had the details of the train. I phoned them and told them the train was at 13:19, what was the platform? 6. Okay, we had seven minutes, we could make that. Ladened with our backpacks and day bags, Rebec and myself could see the station, but could not see a way in. We were walking on a very busy road and the pavement was diminishing. We took a risk and turned right off a slip road into a car park which luckily took us straight onto platform 1. Having bypassed the entrance, we called the others to meet us on the platform. We made it with four minutes to spare. I double checked the train details, just to make sure. Our train wasn’t the 13:19 but the 13:16. Massive booboo on my behalf. Our train was departing from platform 4. As we ran on to the platform, we watched our train leave the station.

No, I thought. We are not changing our plans for a mistake I made. “Stay here,” I said, throwing my big bag down on the platform with the others. I marched to the ticket office to find out what our options are. There was a train leaving in 6 minutes which got us into Kraków at the planned time, or one at 16:30 that arrived at 6:00 in the morning. This was not an option. 6 minutes it was then. I called the others to tell them to get to platform 1. You have 5 minutes. I still had to pay for our reservations. The woman at the desk understood my panic and worked as quickly as possible.

“You have 2 minutes. Turn right out of here, then left, then up the escalator and then the first left up the second escalator.” How far? Now I like to think at this moment in time, Jesse Owens’s spirit helped me out or something, because I ran so fast, shoving people out the way (well, I was still very British about it because I did say ‘excuse me please’ before elbowing them). We clambered on to the train together. We’d made it.

As the train pulled out of the station, we looked around at each other to make sure we’d made it. With adrenaline still pumping through our veins, we began to laugh. I looked as if I was about to be sick and Em looked like the Hulk. She was wearing her big back on her back and mine on her front, whilst Clo was clutching Em’s day bag. As it turned out, we still made the connecting trains that we had originally booked on to, so we would arrive in Poland according to schedule. It was funny because it worked out. Thank God. 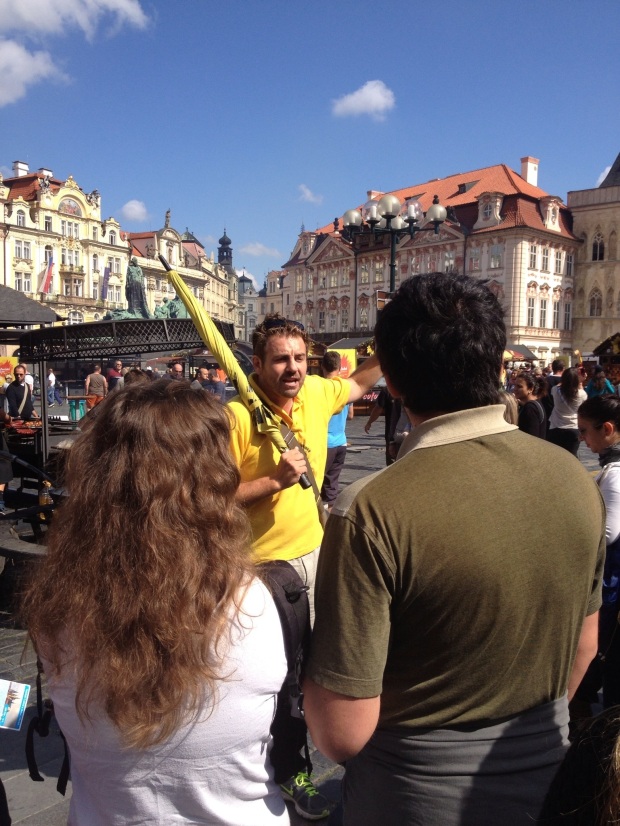 Statue at Prague’s main train station. A reminder of all the Jews who were transported from Prague to the ghetto Terezín and the to Auschwitz