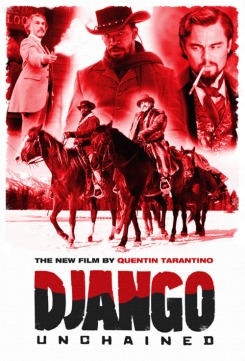 I’m not going to lie; I’ve not really seen this kind of film before. I haven’t seen Pulp Ficiton, I haven’t seen From Dusk Till Dawn, and I haven’t seen Inglorious Basterds. In fact, I don’t think I have seen any of Quentin Tarantino’s films. My bad. But I can tell you now that I loved this one.

Django (Jamie Foxx), a freed slave-turned-bounty hunter, sets out to free his wife (Kerry Washington) from a notorious slave-trader in Mississippi (Leonardo DiCaprio).  Django is helped by German ‘dentist’, Dr. King Schultz (Golden Globe winner, Christoph Waltz) since he is the reason Django was freed: he feels “responsible” for him. Set two years before the American Civil War, Dr Schultz is considered abnormal in associating with a black man – a complete offence to society; unforgivable and life threatening in the Deep South.

It’s funny. There are so many scenes that has me laughing out loud, but at the same time, it deals with some graphic taboo subjects where I felt it was too much to even watch. You actually see a black slave set upon by dogs, to the point where you even see his limbs ripped from his body. I don’t know how it makes me feel; maybe responsible? Guilty? I don’t know, but I do like how it doesn’t shy away from the things that are otherwise left to the imagination. Plus, there is a fantastic scene completely ripping into the Ku Klux Klan.

In true Tarantino style, there is a lot of blood and over dramatic violence juxtaposed with laugh out loud comedy (I have now seen Pulp Fiction and Inglorious Basterds). I wouldn’t recommend it to people who don’t like comedy through exaggeration or gory graphics, but I still give it a 4/5.